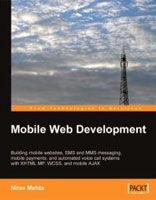 This new book from Packt Publishing & Nirav Mehta is a quick and effective introduction to developing websites specifically targeted at mobile device users. I say “users” for a reason — one of the strongest advantages to the book is a strong focus on considering your user and their needs as a key element of mobile web development.

My overall reaction to this book was positive. It covers a wide variety of key issues for mobile web programming in an easily understood manner. The book is targeted primarily at developers who already have some experience at web development and design, so it doesn’t delve into any serious detail when it comes to server-side programming or HTML (HyperText Markup Language) coding, but instead makes a point of emphasizing places where the mobile web is different from internet interaction on a desktop device.

Mehta goes out of his way on many occasions to emphasize the serious importance of considering who (and what!) will be using your mobile web application.

“Any website accessed from a mobile device is mobile web — whether it’s been tailored to work on a mobile or not!” Mobile Web Development, Nirav Mehta, page 10

The book covers a wide range of issues — from developing for mobile devices using a “lowest common denominator” plan to implementing highly dynamic mobile applications which adapt automatically to the device currently in use. The text is easy to understand and follows a logical progression, starting with the mobile web development practices which are most similar to the development of standard web applications before moving into the areas which are very specifically targeted towards mobile devices.

This isn’t to say that the book doesn’t have a few flaws. I identified three areas where I really would have liked to seen better work.

In general, the copy editing on this text was pretty poor. The editing improved as I got further into the book (or I became more oblivious to it), but the introductory chapters had a lot of problems. There weren’t a lot of typos — but the grammar was noticeably lacking. The book is rife with sentences like this:

“We will need a recharge of patience if we wanted to watch a movie preview on low speed mobile networks.”

I’m not a member of the grammar police, but I’m certainly sympathetic. Professionally published books simply shouldn’t contain the kinds of errors found in this book.

The author talks about following web standards as a critical element of mobile web development. That’s great. It is, however, a serious pet peeve of mine to see code examples which don’t reflect the text of the book. The very first code example in the book is this:

The text preceding it states “Here’s how you can add an alternative stylesheet link in your XHTML (eXtensible HyperText Markup Language - HTML reformulated as XML (eXtensible Markup Language)) page.” I see a problem here. Yes, the author does explain at a later point in the book that all XHTML elements must be closed: but it’s a simple fact of life that most people referencing this book will be far more likely to simply reference the code as is. This is simply a mistake; but it’s not one that should have made it through a review of the book.

I’ll admit that I haven’t gone through and checked the validation of every code example. Most of them seemed solid and accurate. There are definitely examples which wouldn’t be valid under the XHTML DocType, but I’m not adept enough with XHTML-MP to know off-hand if the same is true within the mobile profile DocType.

Simply put, there aren’t any. There were numerous points in the book where I thought to myself that an appendix would be great. A list of resources cited by topic, a section summarizing the syntax of VXML, tables showing the differences between XHTML and XHTML-MP or between CSS (Cascading Style Sheets) and WCSS. These kinds of resources would have been tremendous benefits to the overall reference value of the text.

This is a worthwhile book. Even though I wouldn’t recommend trusting the code examples, the truth is that you should never simply take code examples as written — you learn best by taking an example and re-purposing it for your own needs. Mobile Web Development will introduce you to the key issues for mobile web programming and design in a manner which can give you a quick start on mobile web application development.

Have something to contribute?